by The League of Assholes 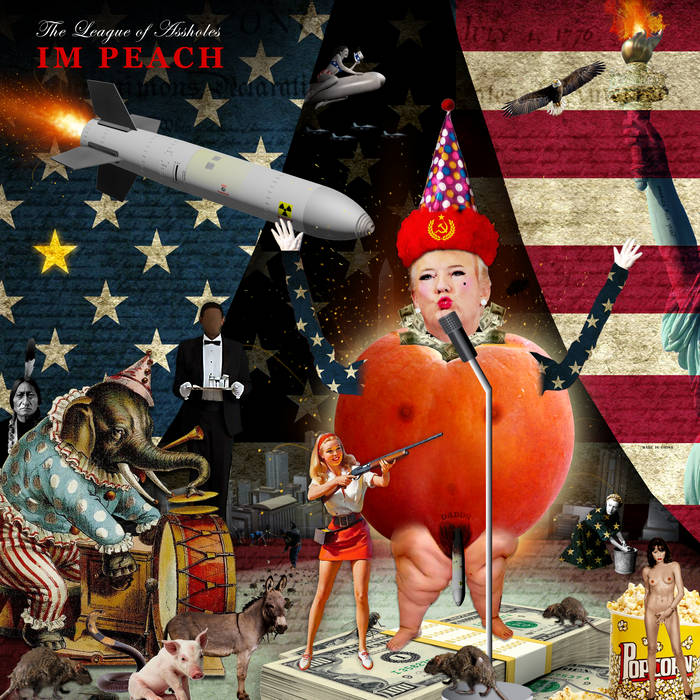 "One by one, they praised President Trump, taking turns complimenting his integrity, his message, his strength, his policies. Their leader sat smiling, nodding his approval."

"He is a fucking pig and should be impeached!"

On this the last day of summer of the year 2017, The League of Assholes offer a new musical incantation titled IM PEACH. This new sound collage picks up where February's Valentine release IN OGRE ATE left off, except the dark brood of the ogre has turned into a popcorn orgy where angry monsters dance with muse-like dolls as a crew of Mexican workers tear down a roof, weaving genres supernaturally blasts a band with a vicious swing and plastic laughing teeth, the kind with feet and a winding knob to rev up the laughs and make the teeth chatter. IM PEACH is an exalting piece of music, an often cacophonous, soulful and surprisingly beautiful collaboration by creative individuals who through channels on the world wide web form a homeless orchestra, driven marauders armed with a multitude of instruments and digital recorders, a band of artists who hold certain disbeliefs to be real, existing in a virtual plane forging a resonant call to action through new music.

"The League of Assholes is like a covent of good witches man, you dig?"